Leo Jennings opened his first butchers shop in Prospect Street Caversham in 1922 just a few doors away from the premises where his grandchildren still run the business today.
‍
When Leo died in 1964 his five sons continued the business as Jennings Bros. In due course just William and John remained as each of the other brothers moved on to establish their own butcher shops outside of Reading. William and John went onto open further shops in the Caversham area.
Tragically William died suddenly in 1971 leaving his younger brother John to run the business but he was later joined by the third generation of Jennings butchers, his own son Nick and William’s sons Dawson, Scott and Max.
‍
By the early 80s Jennings had six retail shops in Reading but also saw a new opportunity in the growing trend of ‘eating out’ as new restaurants and pubs sought good quality suppliers. Offering the same excellent quality and service that the retail business had built its reputation on Jennings expanded into this growing catering trade.

By the time Maradona had scored his hand of God goal in the 1986 World Cup, the decision had been made. The shops gradually went, property was bought, built and converted around the original site in Caversham and a purpose built unit, fully accredited by the Food Stands Agency and other trade Associates became the hub of our catering business.
‍
Jennings of Caversham are now known throughout the Home Counties as a premium supplier to the trade. 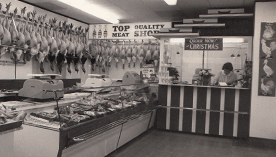